If getting a degree while working a second job is a challenge, finishing one while serving on active duty in the military might seem downright impossible. However, Marine Bryan Hampton has his associate degree in engineering technology in his sights, thanks to the flexibility of veteran-founded National University. The school’s online program even enabled him to take classes while he was deployed overseas.

“For the longest time, I wanted to start taking advantage of my education benefits through the military, but I kept procrastinating and putting it off,” says Hampton, who expects to complete his program in February 2020. “I kept telling myself I was going to wait until I wasn’t so busy, but that day never came. So, I finally just decided to do it.”

Despite the plethora of San Diego military bases, Hampton says alternate universities lacked the flexibility he needed to serve and study at the same time.

“It turns out National was the only place I could find where the majority of my program was online,” he says. “It’s really the only way I could have done it.”

National’s month-long terms enabled Hampton to take one class at a time while maintaining a full-time job. He puts in about two hours a day of work toward whatever class he is taking.

“If you can set out and focus on your schoolwork, you can manage it,” says Hampton. Hampton has appreciated being able to concentrate on a single topic at a time. His degree has been very math-intensive and Hampton says his professors always provide expectations and a schedule of due dates upfront, along with practice problems to help prepare for exams.

Attendance at lectures was never mandatory, and his class lectures were always recorded. The option to view a recording later was especially helpful during his deployment. Lecture times in San Diego often translated into 4 a.m. in Saudi Arabia, thanks to the time difference. Being able to access his classes on his own schedule allowed Hampton to continue with his studies. “There’s no way I could have done it any other way,” he says.

While the majority of his classes have been online, Hampton did have to take a chemistry lab that required him to go to campus when he was back home. However, National’s large population of adult learners made it easy for Hampton to decompress from his workday before heading to class.

“Class started at 6 p.m. in the evening,” Hampton says. “That was plenty of time for most people to get off work and get there.”

And if he ever had questions, Hampton says his professors were always a phone call, email or text away.

“There is bound to be something you don’t understand,” Hampton says, adding that he never had to wait more than 12 to 18 hours for a response to a question. “The professors are really accessible. They will help clear up any confusion.” 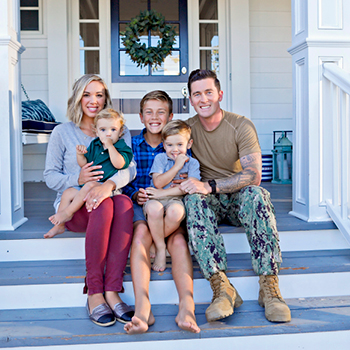 As an active-duty servicemember, the Marines’ tuition assistance program provided Hampton with $4500 a year to use toward his tuition.

“It’s not enough to cover full-time tuition at National, but it will get you most of the way there,” Hampton says. And the money is renewable each year.

Hampton was also one of two Marines honored with a $5,000 scholarship from the San Diego Padres — thanks to the team’s partnership with National University to help military servicemembers achieve their academic goals.

“That definitely made up the difference this year,” he says.

Hampton says he wishes he had not procrastinated with his education. “For me, I’ve already been in the military for almost 15 years. I get these benefits but if I don’t use them, they’re wasted. That’s one of my biggest regrets. I waited almost 12 years before I started, but I’m using them now!”

National’s military-friendliness isn’t solely reserved for those on active duty. Servicemembers who have transitioned to civilian life will find a wealth of resources at the Veteran Center at the Spectrum Campus in San Diego. The center is staffed by veterans who know a thing or two about National’s military benefits because they are using those same benefits themselves and have been through many of the same challenges and experiences as the vets who come to use the Center.

The staff at the center can answer questions about every stage of a student’s career — from the admissions process to securing tuition funding to finding employment post-graduation. Those attending National online or at another of its 41 campuses can receive similar guidance and support from a Virtual Veteran Center, accessible via the school’s communications portal, Blackboard.

Graduation is approaching this winter, but that’s not the end goal — Hampton has no intention of stopping now that he has begun.

“Plans change but right now my plan is to go to Defense Nuclear Weapons School,” Hampton says. “Nuclear engineering is my ultimate goal.”

However, many of his fellow servicemembers opt to remain with National, earning their bachelor’s and even master’s degrees on campus or online thanks to the accelerated programs and the support that attending a military-friendly university like National can provide. Hampton says it’s a great choice and one he isn’t shy about recommending.

“I definitely tell people about National,” he says. “They’re very flexible and accommodating. There is no reason to wait.”

For more information on how you can pursue your education as a veteran or while on active duty at home, on base, or abroad please visit our military admissions program page.