Ask an Expert: Why Is Criminal Justice Important?

When you have a difficult question, it’s always best to turn to a subject matter expert for answers. In our blog series, Ask An Expert, National University faculty take turns answering challenging questions in their areas of expertise.

In this post, we put the focus on criminal justice. We sat down with Professor Marc Bailey of the School of Professional Studies and asked him to share a few insights on why criminal justice is important. A reserve police officer and former television news anchor, Bailey teaches in the bachelor’s in criminal justice online program and serves as the Director of Public Safety Outreach for National University. He also earned his bachelor’s in business administration and master’s in organizational leadership from NU.

Criminal justice touches on all aspects of our lives and in ways that most people might not think about. Criminal justice is important because it’s a system that includes law enforcement, courts, prisons, counseling services, and a number of other organizations and agencies that people come into contact with on a daily basis.

Q: You currently work as a reserve officer for the El Cajon Police Department, but besides law enforcement, you’ve had a career in the media and in education. Can you talk a little bit about how you got into law enforcement in the first place, and your career trajectory since then?

I started as a police officer with San Diego in 1979. While still working as a young officer, I got my bachelor’s degree business in 1982 from National University. I left law enforcement after about five years and I had a career in radio and television for over 35 years. All kinds of TV, but a major portion of that was as a news anchor, locally and nationally.

From the time I was a child, I knew I wanted to be in radio and television, but I really had a drive to serve my community. When I went into law enforcement in the first place, my approach was a little different than most folks. I told the recruiting officer, ‘I want to serve. Law enforcement allows me to serve in my community, right where I grew up. And I’ll give you four years minimum and then we’ll see where it goes from there and see if it becomes a career.’ And the recruiter said: ‘Wow, that’s a different take. I’ve never really heard that before. Yeah, we’ll take you on that basis, if you’ll give us four years guaranteed.’

I could very easily have stayed in law enforcement and had a great career and really enjoyed it, but I had this other thing that made me want to talk all the time, as you might be able to tell from this conversation!

About 10 years ago, while still working in radio and television, I felt the calling to go back into law enforcement. But at that point, I didn’t want to give up my well-established media career, so I went back as a reserve officer. In California, that means you have to have all the same qualifications and training as a full-time officer. I had to go back and re-certify, which I did as a volunteer. And now for the last 10 years, I still work at least 8 to 12 hours one day a week out in the field, answering radio calls like every other cop. You wouldn’t know me from a full-time cop. There is essentially no difference, except I don’t get paid.

I jokingly say, ‘I don’t play golf, so everybody needs a hobby.’ And part of that’s true because I still really enjoy it more than anything else that I could imagine doing. But the truth of the matter is that it’s a calling. There’s no logical explanation for putting on all the gear, a ballistic vest, a sidearm, a taser, a baton, pepper spray, a knife, another weapon hidden away on my body. I feel a deep responsibility to contribute to society whatever tools and gifts that I have.

The truth of the matter is, I love it. I frequently will text my wife when I’m out answering radio calls and I say: ‘I’m in my happy place today.’

Q: What kind of support does National offer to people working in criminal justice who want to pursue further education?

The chancellor here at National is committed to supporting police officers and others working in public safety in achieving their educational goals. If you’re in public safety, if you work for a police department, anywhere in the country or world, you’ve got a 25 percent scholarship at National University for any of our degree programs. It doesn’t matter if you’re not a cop, or you’re working in the property room or in the evidence lab, you are eligible for law enforcement scholarships for any academic program.

We also give these professionals as much credit towards their degree for their prior training as we can. We worked really hard with faculty, with the registrar, and with our accrediting bodies to look at basic training, like the police academy, and see where that aligns with our degree programs.

The training that you get in a police academy aligns really well with criminal justice, homeland security, and public administration — but especially criminal justice. There are normally 17 upper division classes in the bachelor’s of criminal justice degree, but you can cross off as many as seven of those based on what you’ve already learned. For degrees like criminal justice, it’s really a two-part offer with the law enforcement scholarship and recognition of prior training.

We also recognize some training in other states, but every state has different training standards. For example, we’ve implemented articulation with the marshal service, because their training is the same throughout the entire country. We can give them extra credit in those degree programs that I mentioned. Throughout the state of California, we’ve also articulated the training with other agencies like Probation and Detentions, that have different training than what the police officers have.

Q: How do the flexible options at National University help working adults fit their education into already busy lives?

National University was the only place that I could take all my units from community college and the four-year schools that I had gone to and concentrate on one class per month. A few others do it now, but we pioneered the one-class-a-month format in 1971 to support an adult population, especially military, who couldn’t commit to a full semester. Now we’ve found that this translates to adult learners in general.

This format is still incredibly applicable to those in public safety who are doing shift work. They’ve got a family, they’ve got their career, they got all these units that they don’t know how to turn into a degree. And on top of that, they’re doing crazy shifts. Not only do we do one class per month, but we can offer entirely online degrees for most of our classes without diminishing the quality of the education. And we can also offer the online degrees asynchronously so that you don’t even have to log in at a particular time. You can get online and do your work anytime and the professor is still available to you, you can still interact with your classmates, but you do it on your time. It’s more accessible now than it’s ever been.

A lot of law enforcement professionals naturally gravitate towards criminal justice, because it most directly benefits them and they can apply it in the field immediately. And that’s what we pride ourselves on in our classes. We want you to take what you learned in class and that day take it out to work with you that day.

But a degree in criminal justice can be useful even if you don’t want to be a cop. Understanding the criminal justice system as the whole of all these integrated parts gives you a broad perspective that most people don’t have. It makes you look for integrated and systems-oriented solutions as opposed to quick fixes.

That kind of systems thinking and integrated problem-solving will serve you in any profession, anywhere in the world, in anything that you do. We need new ways to look at problems and how to solve them. And if you decide to go into the field of criminal justice, you’ll go in with your eyes wide open to the fact that it’s a whole lot more complicated than people think. 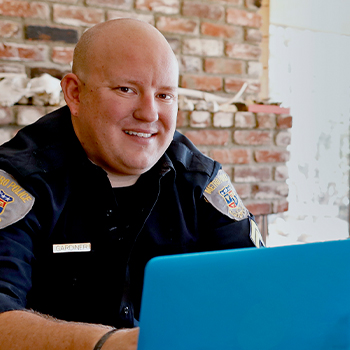 If you are interested in pursuing a career related to criminal justice, National University offers online degrees in Criminal Justice as well as on-campus classes. The Bachelor of Science in Criminal Justice Administration prepares students to work in the justice system at the local, state, and federal levels. Studying criminal justice can lead to a career as a police officer, detective, probation officer, correctional officer, forensic science technician, crime scene investigator, FBI agent, fraud investigator, social worker, lawyer, DEA agent, US marshal, or many other positions within law enforcement and judicial agencies.

While a bachelor’s degree is not a requirement to become an officer in a local police department, postsecondary education can be important in being promoted to supervisory or other leadership positions. Many agencies will also offer raises when employees complete degrees. According to the Police Foundation, almost 75 percent of law enforcement agencies pay police officers an extra 1-7.49 percent for earning a bachelor’s degree.

Federal agencies such as the FBI and CIA require a bachelor’s degree and other additional training for most positions. In 2017, the median pay for police officers and detectives was $62,960 nationally, according to the Bureau of Labor Statistics. California has more law enforcement jobs than any other state in the country, employing nearly 73,000 sheriffs and police patrol officers. The annual mean wage in California was $100,090 was 2017.

Elective courses from psychology, sociology, addictive disorders, behavioral science, legal studies, information technology, and human resource management also allow program participants to gain a broader perspective in human behavior. Students also complete a senior capstone project in collaboration with faculty many of whom are also active professionals in various branches of the criminal justice field. Classes are offered in a one-per-month format that allows students to balance their education with personal and professional commitments.

You can learn more about National University’s Bachelor of Science in Criminal Justice Administration, as well download information about criminal justice careers, law enforcement scholarship opportunities, and how to get CA POST police academy training credit — all on our program page.

Marc Bailey joined National University in 2016 after a 35-year career as an Emmy-winning news anchor, host, and producer. He is also a veteran law enforcement professional, joining the San Diego Police Department in the late 1970s. He currently volunteers as an El Cajon police reserve sergeant. Bailey earned a bachelor’s of business administration and a master’s in organizational leadership from National University. As a professor, he has taught investigations, media and policing, corrections, and juvenile justice, among other criminal justice courses.

Bailey  joined National University in 2016 as the Director of Innovative Digital Media. He currently serves as the Director of Public Safety Outreach. In that position, he promotes education in the public safety sector, by informing law enforcement professionals about scholarships and credit for prior learning. He regularly visits law enforcement agencies around California to share information about opportunities to earn a bachelor’s of criminal justice online and other degree programs at National University.

How to Choose the Right Student-Parent Friendly College

5 Tips for Parents in College

Resource and Help for Single Parents in College