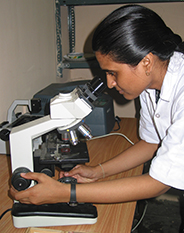 March is Women’s History Month, and on March 8 we specifically celebrate International Women’s Day. This year’s theme, Be Bold for Change, calls to mind one of National University’s international students who continues to persevere toward achieving her educational goals.

Jayshree Patel grew up in Gujarat, India as the only girl in a large, close-knit family. Her father had a job that required the family to move frequently, so she learned to adapt to different cultures at an early age. Partly because she was the only girl in the family, and partly because her mother was denied an education, Jayshree felt the need to work harder to get an education, unlike many of her peers.

At that time in her community, girls rarely left their homes, especially for an education. Despite that, Jayshree’s parents allowed her to take public transit to an urban area to get her high school diploma, bachelor’s and master’s degrees. She eventually earned a PhD through one of her employers.

Jayshree came to the United States in 2015 to study at National University and joined the English language program (ELP), making English her fourth language (she previously spoke Gujarati, Hindi and Sanskrit). The ELP courses gave her the confidence she was lacking in speaking and academic writing.

“I was nervous about my decision to study for an MBA, and I found my first four-week course to be challenging,” said Jayshree. “With help and guidance from my professors at National University I got through it.” Over her 16 months in the MBA program, she wrote numerous papers and presented her work to the class as a part of a course requirement. “I would have never done that without the help of those great teachers,” she said.

Jayshree is well on her way to achieving her short-term goals of a great education. Her long-term goals? Establish a biopharma company with a special focus on developing new antibiotics. “There have been no new antibiotic discoveries in the last 30 years, yet every year, new types of infections emerge,” said Jayshree. “I’d like to use my education and my love of science to improve this.” We have no doubt that Jayshree will do this and much more in the coming years.