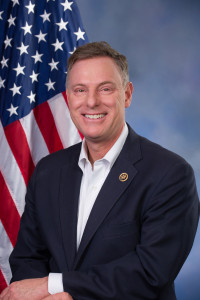 San Diego, CA—June 17, 2019—Today, National University, which is among the largest accredited private, nonprofit universities in California, announced Congressman Scott Peters (CA-52) will deliver the 47th keynote address at the Southern California Commencement. Peters is a leader in the San Diego community whose work in Congress has increased resources for the military and veteran community and supported environmental sustainability. He will address approximately 15,000 attendees including graduates, their families, and guests at the San Diego Convention Center on June 30.

“Congressman Peters is a dedicated public servant in San Diego, who contributes tirelessly and passionately to make our community better,” said National University President Dr. David Andrews, who will preside over the commencement ceremony. “He exemplifies great leadership and works collaboratively to affect measurable and impactful change. We are honored to have him address National University’s graduating Class of 2019.”

National University, the anchor institution of the National University System, serves a diverse student population, including a significant number of adult learners handling multiple responsibilities while they pursue their degrees. The University’s flexible 4-week course format makes obtaining a degree more attainable for students of all ages. Class of 2019 graduates range from 20 to 78 years of age with an average age of 33.

Prior to joining the U.S. House of Representatives, Peters served on the San Diego City Council, as City Council President and as Chairman of the San Diego Unified Port Commission. Before that, he worked as an environmental lawyer for 15 years and served as an economist for the United States Environmental Protection Agency in Washington, D.C. He was first elected to Congress in 2012 and has worked across the aisle to stand up for San Diego’s military and veterans’ community. He was an original co-sponsor of the Forever G.I. Bill, a sweeping reform of veterans’ education benefits passed by Congress, and a member of the Veterans Affairs Committee.

“It’s an honor to be invited by National University’s students, faculty, and leadership to address the Class of 2019,” said Congressman Peters. “We share a commitment to public service and supporting our veterans and military community and I look forward to congratulating this year’s graduates whose stories embody perseverance, dedication, and commitment to building a brighter future for San Diego and beyond.”

Peters currently represents California’s 52nd Congressional District, which includes the cities of Coronado, Poway and most of the City of San Diego. He serves on the House Committee on the Budget and the House Energy and Commerce Committee, where he advocates for investment in basic scientific research, supports the military’s goals to enhance their energy security, and fights for commonsense healthcare reforms that work for families and small business owners.

National University’s Southern California Commencement ceremony is set to begin at 2 PM on Sunday, June 30. The event will also be livestreamed on the University’s Facebook page.

By checking this box as my electronic signature and submitting this form by clicking the Request Info button above, I provide my express written consent to representatives of National University and National University System affiliates (City University of Seattle, Northcentral University and National University Virtual High School) to contact me about educational opportunities, and to send phone calls, and/or SMS/Text Messages – using automated technology, including automatic dialing system and pre-recorded and artificial voice messages – to the phone numbers (including cellular) and e-mail address(es) I have provided. I confirm that the information provided on this form is accurate and complete. I also understand that certain degree programs may not be available in all states. Message and data rates may apply. I understand that consent is not a condition to purchase any goods, services or property, and that I may withdraw my consent at any time by sending an email to optout@nu.edu.